It had been quite a while since Shankar had gone on a long trip. Though the trip to the water pump would not be a long one, it was still better than having to spend the entire afternoon at home. The water pump was situated about a dozen miles away from the village and the only way to access it was to either walk down the narrow path or ride on a two-wheeler.

Shankar sat on the edge of the seat, both in anticipation of the ride and also that there was hardly any extra space on the moped anyway! A water pot, one of those new plastic ones that had hit the market recently, sat in front of him. Shankar's cousin had her arms around two more of the empty water pots. Grandpa sat between the two managing to keep the moped on the narrow path.

Shankar noticed that the queue in front of the government tap had grown. Women in the queue had their heads covered in saris to save themselves from the wrath of the sun and their kids were either playing in the mud or were chasing each other around despite the hot weather. As the moped passed the government tap, the village kids jumped about waving at the moped giving an impression to any random soul that the moped was off on a really important expedition! And an important expedition it was.

The narrow path wound in between the hills. There were temples on top of some of the hills. Shankar made a mental note to ask his cousins to take him to the top of some of the hills. He had been to the top of Basavana gudda, a famous hill temple in those parts, two months ago with his dad and cousins and he had enjoyed home made laddoos (a sweet) in the breeze. The very thought of the sweet made Shankar's mouth water. He suddenly found himself craving for some sweet but he didn't dare open his mouth since he was certain that his Grandpa would not be happy about them making a pitstop just moments after they'd left home. He soon forgot about his craving and began to enjoy the ride. Whenever the moped came across big potholes, Grandpa would slow the moped to a standstill and maneuver it around them. 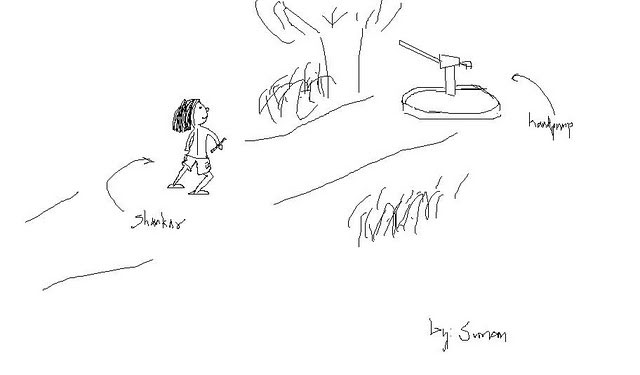 The pump was situated between a set of hills on either sides. Because of this unusual geography, it was constantly windy throughout. It was so windy that the lid on the water pot flew away. Shankar chased it down and put it back on its rightful place and then sat over the lid so that it wouldn't fly away again. As he watched his Grandpa and his cousin fill the remaining two pots, he was lost in thought. He had missed an opportunity to get his toy fan. The blades of the toy would rotate in the presence of a breeze. Shankar's mom had bought it for him in a fair during their visit to Mysore.

The moped left for home. This time the pace was even slower with the additional weights of the water pots. It took almost double the time to get back home.

Shankar noticed that the scene in front of the government tap had not changed. The queue, in fact, seemed to have grown a bit longer! He could almost notice the women in the queue eying the water pots on the moped! The moped reached the destination.

Shankar's mom was sitting by the door clearing away the bad seeds from the wheat. She put aside the wheat and came to the moped to help take the water pots inside the house. Shankar jumped from the moped and ran inside to eat some homemade sweet.

A writer's satisfaction lies in the reader's joy. :).

What do you feel about this short story? Holler back to me with your thoughts!