As I mentioned in my previous post, I present to u a cut-snip, re-edited version of chronicles 1 and 2. Enjoy the read!

It was a bright day and the daily chores had already begun. Being in the countryside you would wonder if life without so much chaos is even possible. In this calm little village lived a little kid – Shankar.

Shankar was playing by the gate in the courtyard. His amma (mom) brought him some breakfast. He quickly finished it and was ready for some more. This guy could definitely eat a lot! Amma went to the kitchen to get more.

Shankar was preoccupied with swinging on the gate. That was when he saw that his thatha (grandpa) had gotten ready to drop his cousins to the school. He always loved rides on the moped and, as usual, wanted to go along. Since it was already late, thatha decided otherwise. Even before Shankar could retaliate, they had left! Shankar decided that he had to follow them and began running behind the moped. Unfortunately for him, his tiny legs could not match the moped's speed. Even on village roads, the moped could wind its way on the narrow paths pretty fast! 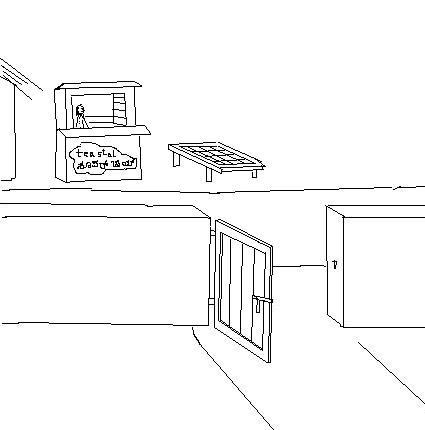 Meanwhile - a herd of sheep and a bullock cart were directly ahead of him. The herd was being taken to a nearby field for grazing. Though Shankar never liked sheep, he was determined to follow the moped. He continued to run in the direction of the moped.

Soon he was completely surrounded by the sheep on either side and he did not like it one bit. The bullock cart was now right in front of him. Making matters worse, the sheep and the cart were both moving slowly. He had, just a second, to make a decision. He decided that the best way to cross to the other side was to go right under the cart and in between the two bulls! And he did exactly that! He ran between the two bulls! For a small guy he was quite a package.

He had finally managed to pass the hurdles that came in along his way. But now it dawned upon him that he was completely lost and the moped was nowhere to be seen! He tried to be brave but was almost in tears. He had forgotten his way back too. He continued walking in a direction which he thought thatha would have taken. He came across a flour mill, on the way, which had a set of huge noisy machines with equally noisy clients. The machines caught his attention. He had always been fascinated by machines. As he watched the machines operate, he momentarily forgot his dilemma!

Amma in the meantime came back with more food and called out Shankar’s name but to no avail. When Shankar never responded even after her calling out for five mins, she told about his absence to his aunt. Both of them began to search for shankar frantically inside the house. When they saw that the gate was open, they decided to check if he had run outside someplace.

A lady in the meantime saw Shankar watching the machines and she picked him up. She started walking away from the flour mill carrying him. Shankar was too confused and was not sure if he had to scream out loudly.

The roadside tea stall guy told amma and atte (aunt) that he had seen a small boy running behind a moped. Both of them immediately guessed that it must have been Shankar. They too set out in the direction as pointed out by the tea stall guy. They could see a lady chatting with someone carrying a kid with her. On reaching a bit closer, they saw that it was Shankar in her arms. Amma was overjoyed. She ran forward and hugged Shankar and kissed him.

Amma and atte learnt later that the lady was Shankar's ajji’s (grandma's) friend. She had recognised Shankar and was on her way to drop him back to his place.
Scribbled by Suman W M Sivachar at 9:08:00 PM